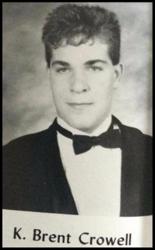 The 2018 – 19 school year marks the 25th Annual DeMatha Hockey Golf Classic, in Memory of Brent Crowell.  The DeMatha Hockey program continues to honor Brent in hosting this annual event in which all proceeds go to the DeMatha Catholic Hockey Program.  Brent attended DeMatha where he was an upstanding member of the lacrosse program.  However, being a leader and standout player for the DeMatha hockey team, he led his lifelong passion for the game and the school.

Brent’s parents Ken and Sandy fostered Brent’s desire for the game of hockey.  As a young developing hockey player, Brent initially played for the “Cap Boys” Program that played at the Wells Ice Rink before playing minor hockey for the Chesapeake Chiefs.  Brent later honed his skills as one of the top performing players with the Washington Junior Caps.  Brent’s sisters Kim and Courtney were also huge supporters of Brent’s pursuits who continue to support and develop the Golf Classic in their Brother’s name.  A true “Hockey Family” through and through, The Crowell’s had season tickets for the Washington Capitals before Ken and Sandy moved to Tennessee, where they now enjoy attending Nashville Predator home games.

Brent’s talent and exemplary character were part of the infancy DeMatha Catholic High School Hockey Program, developed by Father Claude Gravel and Coached by Pat Krimm.  Brent’s extensive hockey career and hard work paved the way for many victories for DeMatha as well as helping the program to become what it is today.

Brent enjoyed many hobbies as a busy young man and along with school, hockey and lacrosse, he enjoyed surfing as well as riding dirt bikes.  A laid-back individual with a great sense of humor, Brent was extremely well liked by team mates and friends.  Always outgoing and easy to speak with, Brent’s kind nature was always infectious to his friends and family.  Gone, but never forgotten, we salute and recognize a person who personifies the Tradition and Integrity that is, DeMatha Hockey.

Thank You Brent!  We Love and Miss You!